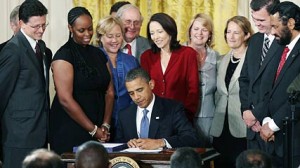 (Sept. 27) — President Barack Obama today signed into law a chain of tax cuts for small businesses and up to $14 billion in federally funded loans aimed at stimulating job creation, in what’s likely to be the government’s last bid to boost the economy before the midterm elections.

Enactment of the Small Business Jobs Act, passed with the support of just two Republicans in the Senate and one in the House, comes at a time when economic growth has yet to generate enough momentum to replace the more than 8 million jobs taken by the recession — the majority from small businesses. A dearth of commercial loans remains one of the biggest factors holding back the recovery.

“Government can’t create jobs to replace the millions that we lost in the recession, but it can create the conditions for small businesses to hire more people through steps like tax breaks,” Obama told a gathering of small-business owners at the White House before signing the bill. …

The $42 billion law would extend several small-business loan programs created by last year’s Recovery Act and give tax cuts to small businesses and their owners that would encourage new investment and hiring.

The White House said more than 1,400 small or midsize companies with more than $680 million of loan applications already in the pipeline and approved by banks would immediately benefit from the program. In total, about $14 billion in new loans could be funded. The maximum size of loans supported by the Small Business Administration would also increase, to $5 million from $2 million, and some manufacturing-related loans could reach up to $5.5. million

The new tax cuts would let small businesses write off hundreds of thousands of dollars in equipment purchases while eliminating capital gains taxes for about 1 million companies, and many entrepreneurs would be allowed to deduct the first $10,000 in startup costs.

The law also lets self-employed Americans deduct all health insurance costs for themselves and their families. …

Want to grow your business? Our experts can answer your questions to help you make informed decisions.
Fill out this request form

Affected by Ida? Don’t Wait for Insurance to Apply for SBA Disaster Loan

Subscribe to our email newsletter and we'll let you know about upcoming events and workshops to help you improve your business skills.
Subscribe to get the latest info

CORONAVIRUS (COVID-19) INFO: The NJSBDC Network and Your Small Business